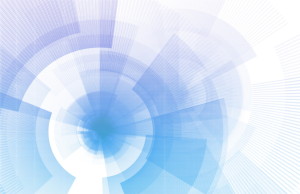 A picture, they say, is worth a thousand words. And certainly, most of us routinely choose to present business data in chart form, tapping into Microsoft Excel’s rich library of chart types and graphing tools. More than ever, clever infographics and incisive data presentations are driving crucial business decisions.

But as we prepare our charts for the next sales meeting or strategic review, it’s worth tipping the hat to past pioneers of data presentations—pioneers whose inspiration and genius laid the framework for the infographics, charts and data presentations that we all rely on today.

And more than that, some of those past data presentations were powerful enough to inspire real change, as well—changes significant enough to change the course of history.

Which is a sobering thought, as we quickly fire up Excel to produce our usual run-of-the-mill bar charts.

Born in 1759, Scottish engineer and political economist led an eventful life, including taking part in the storming of the Bastille during the French Revolution. Beginning his career as a draughtsman and personal assistant to the James Watt, the inventor of the steam engine, he spent time in France and Germany working as a writer and pamphleteer.

For almost 40 years, his publications contained statistical charts that had never before been seen—data presentations involving bar charts, pie charts, and line graphs. 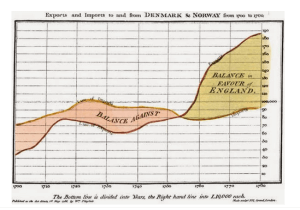 Sadly, his innovations in data presentation were received with some indifference, and it was almost a century later before accepted statistical wisdom caught up with Playfair’s pioneering work.

But his Commercial and Political Atlas, published in 1786, was indisputably the first major work of any kind to contain statistical graphs, and serves as a lasting memorial to a data presentation pioneer born before his time.

The popular image of Florence Nightingale is as a nurse during the Crimean War. In fact, she was better known in her time as a medical reformer and campaigner, producing a number of reports and treatises.

Her ‘coxcomb’ and ‘bat wing’ diagrams—similar to today’s spider diagrams and radar charts—powerfully made the case for better public health, in particular among the soldiers of the British Army. 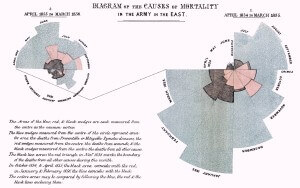 Contrary to popular opinion, observed Nightingale as she researched the subject, the vast majority of soldiers did not die from wounds received in battle. The result? Major military healthcare initiatives, focused—literally—on keeping fighting men, fighting fit.

Showing both the initial march (the brown-yellow band in the diagram), and the subsequent retreat (the black band), the width of the band represents the number of surviving soldiers.

In all, some six variables are shown, across two dimensions: the number of Napoleon’s troops; the distance travelled; temperature; latitude and longitude; direction of travel; and location relative to specific dates.

Drawn in 1869, it once again turned conventional wisdom on its head: the Army’s greatest losses weren’t incurred on the retreat from Moscow, but the initial march to it. Valuable lessons as to the importance of military logistics and military supply chains had been learned.

And even to this day, powerful data presentations rarely come more compelling.

Any modern reporting tool—and remember, Excel is primarily a spreadsheet tool, not a reporting tool—contains a rich source of charting and data presentation templates.

So don’t feel restricted to just the usual run-of-the-mill bar charts and pie charts invented by William Playfair over two hundred years ago. Try something different.

And who knows? Maybe your data presentations, too, will inspire genuine change.

To find out how you can create powerful data presentations in your business, download our free guide to creating compelling business dashboards below