Businesses have often taken a 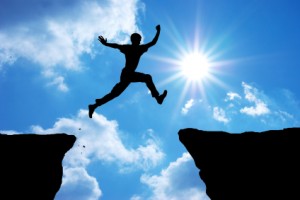 stance when it comes to implementing Cloud BI solutions, but with recent advances this decision involves less risk than ever before.

The relationship between the Cloud and Business Intelligence has continuously grown in strength over recent years, and yet its use has mainly been restricted to only partial areas of Intelligence Operations. A number of underlying concerns have deterred many businesses from rolling out a full scale Cloud BI project, but these concerns are often unwarranted as the Cloud provides begins to offer an increasingly viable alternative in the move away from on-premise operations.

Confidence in Cloud BI is at a high right now as seen by the satisfaction rates found in a recent Dimensional Research study. The study found that over 80% of respondents were highly satisfied or satisfied with their Cloud BI adoption.

No longer can the decision to implement Cloud BI be considered a ‘leap of faith’. Instead, it has become an extremely sensible option that has been substantiated by the high rates of success seen by current users and the fact that many large names are beginning the transition to the Cloud. Rather than being a journey into the unknown, it is now a process that can be based on significant amounts of empirical data and the insight given by the success stories of similar sized firms.

Cloud BI has witnessed advances across a number of different areas but it is three breakthroughs in particular which have led to its increased adoption over recent years. An article by Jean-Michel Franco (@jmichel_franco) looks at the breakthroughs that have been made in terms of technology, cost and the way in which information is shared.

Franco looks at how the Cloud has played a major role in revolutionising traditional data warehousing operations, particularly the ability to manage information as it comes so that the data is as close to ‘real-time’ as possible.

For those who have not yet embraced the Cloud, business operations often put great strain on what can be already limited resources due to the complex layers of intelligence structures and the high physical requirements. However, the Cloud places much less emphasis on this physical infrastructure and advances in technology mean Cloud BI focuses more heavily on the ability to self-serve.

Franco discusses how ‘costs associated with business intelligence databases remain high and are often a deterrent’. Indeed the up-front costs alone are often too high for smaller businesses to incur and that’s before the regular maintenance costs that are essential in order to keep the operation running smoothly.

A recent Forbes article explores how the Cloud allows businesses to move their applications to the provider’s infrastructure and as a result save money on the expansion of their own data centres.

Cloud BI offers a much more economical alternative to traditional Business Intelligence and offers much greater flexibility in terms of payments structures. The majority of Cloud BI vendors offer monthly and yearly subscriptions which offer greater flexibility at a significantly reduced cost. Franco even found that one Cloud BI Vendor offered products which were less than a tenth of the cost of traditional competitors.

The final advantage that comes with Cloud BI is the increased ease with which information can be shared between the business and the BI vendor while still maintaining extremely high levels of security.

With greater access to this information, vendors can tailor the product towards the customers’ needs with greater effectiveness.  Franco uses the example of the way in which utility providers help customers optimise their consumption through monitoring their usage. By using the same principal, Cloud BI vendors can track the usage of their Business Intelligence systems and in order to help customers gain the most they can from their products. This may also result in a more ‘pay per use’ form of payments structure which could be more cost effective for the client.

Overall, it seems as though Cloud BI has become a perfect solution for many of the typical problems associated with traditional Business Intelligence operations. The breakthroughs that have been made mean that firms can be confident in their decision to switch to the Cloud and its proven track record of success means that it is no longer simply a leap of faith.

Find out more about Cloud BI and register for our free webinar below.