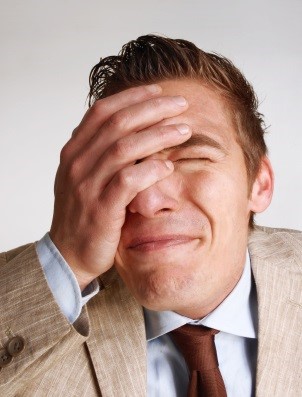 The good news? It doesn’t have to be that way. Avoid these three simple—yet common—mistakes with executive dashboards, and you’ll unleash a powerful force for performance improvement within your business.

Look at the cockpit of a modern passenger jet, and you’ll see thousands of switches, dials and gauges.

But, as with any other aircraft built in the last fifty years, the critical information needed to fly the aircraft is arranged before the pilot’s eyes in a ‘T’ shape: air speed, altitude, heading and aircraft attitude. From a tiny Cessna to a Boeing 747, the ‘T’ shape rules supreme.

And then provide it. Everything else is clutter and distraction.

Executive dashboards: presentation is everything

The whole purpose of executive dashboards is to present users with information that they can absorb at a glance. What’s going right? What’s going wrong? Where are problems about to arise?

So it’s important to present that data in a way that aids the process of rapid visual assimilation. Yet you’d be surprised how often that design principle isn’t followed.

Ponderously-drawn charts that need careful study before they can be understood, charts drawn in 3D, hard-to-read fonts, the use of charts that aren’t appropriate for the data being displayed, heavy use of numbers rather than visual imagery—here at Matillion, we’ve seen it all.

But fortunately, the dashboard metaphor opens the door to a host of techniques that avoid these problems. Colour-coding to indicate problems and ‘out of limits’ status. Gauges. Simple line, bar and pie charts, again colour-coded. Go/ no-go status. And so on, and so on.

In short, sophisticated data visualisation undoubtedly has a place in your business—but it isn’t on your executive dashboards.

Executive dashboards: it’s all about context

Useful though executive dashboards are, the word ‘dashboard’ has arguably led many dashboard designers in the wrong direction. In particular, they’ve focused on delivering information as dials or gauges—just as your speedometer does.

The problem is, that deprives the user of context. To return to the speedometer for a moment, the user must themselves place their current speed in the context of their desired speed. How fast do they want to be going, for instance? What is the speed limit?

In other words, a dial or gauge on its own—even with coloured arcs—doesn’t provide the context that business users typically need. In particular, it deprives the user of trend information, and historic information.

In other words, a dial or gauge tells you the current level of sales, for instance, but doesn’t place that in the context of last month’s sales, or the sales target. Nor does it tell you if sales are going up, or down.

In other words, if you find yourself thinking in terms of dials and gauges, it’s probably time to ask if a simple line chart or bar chart wouldn’t be better.

Hugely powerful, executive dashboards are revolutionising the way that executives work. They’re a genuine advance, especially when delivered affordably, and without the strain of an old-fashioned, traditional Business Intelligence project.

But any tool is useless if left sitting in a drawer. Urge your users to actually use their executive dashboards, and make it easy for them to do so. So if your executives are using smart phones and tablets, then that’s where their dashboards should be, too.

If you would like to know how your business could benefit from an executive dashboard, register for our free webinar below.