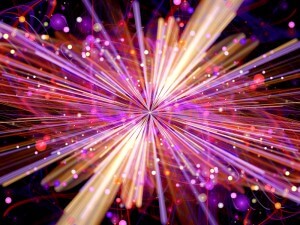 What happens when you turn into sound the signals that emanate from sub-atomic particles? The physicists at CERN—the European Particle Physics Laboratory in Geneva, where Sir Tim Berners-Lee invented the World Wide Web back in 1989—have an answer.

Applying so-called ‘sonification’ techniques to the Higgs Boson particles detected by the Large Hadron Collider—a 27 kilometre ring of superconducting magnets buried in a tunnel beneath the France–Switzerland border—they were startled to hear the particles emit recognisable musical tunes.

Which tunes, precisely? Well, Beethoven’s Fifth Symphony, for one. And Wagner’s Ride of the Valkyries, for another. And not just as tinny beeps coming from an oscilloscope-type device: in a recording released by CERN last week, a full-scale orchestra can clearly be heard.

From the Higgs Boson to String Theory

And the CERN team are now apparently hard at work on sonifying other particle data, to see if further musical patterns can be recognised.

The next step: to see if other any physical phenomena have music in their background noise. In the accompanying video, for instance, a researcher spoke enthusiastically about String Theory.

That said, the announcement’s dateline—April 1st—provides a clue as to the real nature of the science in question. The Higgs Boson may possess some remarkable attributes, but it seems that sounding like well-known pieces of classical music isn’t one of them.

Despite that, it turns out that the work at CERN that led to the discovery of the Higgs Boson is underpinned by some equally remarkable computing technology.

And it’s computing technology in which Amazon’s AWS plays a full part, as Sanjay Padhi of the AWS Scientific Computing team has recently disclosed.

A petabyte every second

The sub-atomic particles that CERN is hunting for are detected by the Large Hadron Collider’s Compact Muon Solenoid, a detector sitting in a cavern 328 feet underground near the village of Cessy in France.

69 feet long, 49 feet wide and 49 feet high, it generates approximately one petabyte of data per second, which is processed and then distributed to seven large Tier 1 data centres across the world. One of which is the United States Department of Energy’s Fermilab, located just outside Batavia, Illinois.

And as data volumes mounted, the Fermilab scientific computing team looked to maximize cost efficiency by dynamically provisioning resources on an as needed basis.

The additional 58,000 cores represent a fourfold increase in Fermilab’s computational capacity, reports AWS Scientific Computing’s Padhi. And with it, researchers can conduct many more Monte Carlo simulation events, hunting for clues that might reveal further particles.

And without the help from AWS, says Padhi, this work would have taken six weeks to complete using Fermilab’s on premises resources.

AWS at the forefront

The bottom line is clear.

With experiments such as those taking place in high energy physics right now, research is increasingly characterised by irregular cycles of massive computing workloads.

And AWS offers a way for researchers to obtain computing resources that can rapidly expand and contract to meets those workloads.