This is the third blog in a three-part series on Matillion ETL deployment options. This article describes the third of three commonly-used choices for how to manage and deploy your Matillion solution between multiple environments, for example, development – test – production. Note that in this series we’re looking exclusively at options which are available through Matillion ETL’s web user interface. Additional options are available using Matillion’s REST API.

In order to describe the details, first a few definitions. What’s a Matillion “instance”? What do we actually mean by “Matillion code”? And what’s a “Project” as opposed to an “Environment”?

Definition of a Matillion ETL Instance

When you purchase Matillion ETL, you actually have to do two things:

Matillion ETL is a Virtual Machine (VM) which, when launched, runs in your own cloud environment (it’s NOT a SaaS solution, which would be hosted on your behalf by some third party).

You can stop and start your VM whenever you want. You connect to the Instance using a web browser, by navigating to the address supplied by the cloud infrastructure provider (for example AWS, Google or Azure).

Every running Matillion ETL VM is one Instance.

By launching the product repeatedly you can choose to have more than one Matillion Instance running at the same time, and that’s the code deployment scenario being described in this article.

Every Matillion Instance is an ELT tool: it does two main things on your behalf:

These two things are implemented by Orchestration Jobs and Transformation Jobs respectively. 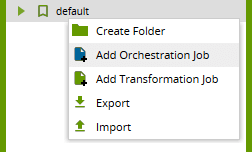 “Matillion Code” means the definition of the Orchestration and Transformation Jobs that you are using. Matillion Jobs always exist inside a Project.

A Project is simply a collection of metadata. When you’re working in a Matillion ETL Instance you are always within the context of a Project. When you log in, it’s the first dialog that pops up after the login credentials. 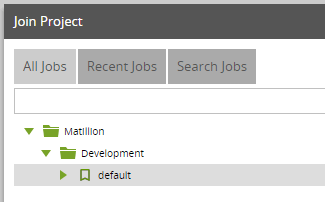 You’ll need to select a Group, a Project and a Version. In the above screenshot, these are:

A Matillion Instance can contain multiple Groups, and every Group can, in turn, contain multiple projects. It’s often simplest to stick with just one Group, and a good choice for the Group name is your company name.

One Project can contain multiple Versions. You can create your own version snapshot at any time, but there’s always a current one named “default”.

Among other things, Projects contain

It’s the “Environments” which define where the Matillion Jobs can be executed at runtime.

To manage your Environments you’ll need to expand the panel at the bottom left of the screen, which is minimized by default. 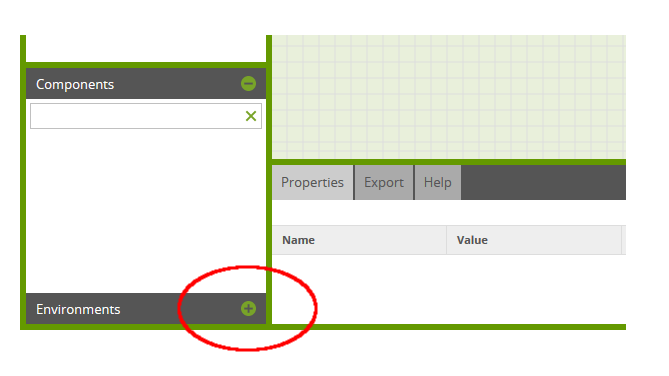 When you first launched and connected to a new Matillion ETL Instance, you went through an initial configuration screen. This asked for details of the target data warehouse plus a couple of other configuration items. For this reason, you’ll always have at least one Environment.

When deploying code through multiple Matillion ETL instances, it’s highly recommended that you create one Environment per Project, pointing to the target data warehouse for which the instance was created (development, test or production).

You can manage environments through the right-click context menu. The Edit Environment option will take you back to that initial configuration screen, where you can change the settings if necessary. 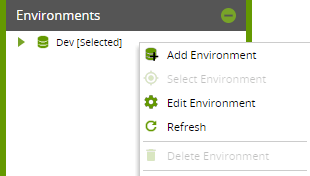 You can add, edit and remove Environments using these options.

With this code deployment option:

If you started out with a “Development” Matillion ETL instance, you might now launch a new one for “Production”. It will take a few minutes to launch and log into the web interface. Once connected you should set it up with the same Group name and the same Project name that exist on the Development instance.

You’re also creating a new Environment at this point, and as explained in the previous section it’s a good idea to name it “Production” this time:

Once completed, you’ll have two running Matillion instances, both with the same Project Group (ideally named after your company), and the same-named Project:

You may extrapolate this scenario to fit any combination of environments that you need. Some examples are:

Matillion ETL’s mechanism for copying job metadata from one Instance (or Project) into another is via the Export/Import feature.

While editing a Job, you can find the Export option from the right-click context menu:

You can also get to the same dialog by following the Project / Export menu. The dialog allows you to select one or more Jobs to be saved and downloaded as a JSON file. You can put this file into external version control.

From the Project / Import menu, you can import a Matillion-generated JSON file, and choose which jobs to import into the target Project.

Matillion also has various REST API endpoints for exporting and importing Jobs. These are used for automation, although be aware that API-generated metadata formats are not compatible with the UI-based export and import.

A note on Environment Variables

Environment variables have a very useful feature in that you can set a different default per Environment.

While logged into the Development instance, your Project might have a variable named target_schema. Its default value (for the Dev environment) is set to dev_schema.

Similarly, while logged into the Production instance, the same variable can exist, but with a default value (for the Production environment this time) set to prod_schema.

So, instead of hardcoding the schema name of a Table Input component, for example, you could set it to ${target_schema}

Incidentally, this is why when you export an Environment Variable, the default value is not among the properties that get saved into the JSON export file.

When you use multiple Matillion Instances to manage code deployment, you effectively set up multiple parallel copies of the codebase, each copy pointing to a different target data warehouse (dev, test or production).

You control exactly when and what code gets promoted into the different environments. Also, you can take advantage of the Environment Variable feature which allows you to automatically customize job behavior according to where it is running.

Metadata items such as user logins, OAuth credentials, and the Password Manager are instance-wide and automatically apply to every Project. You can take advantage of this for example to:

This method of code deployment is the most sophisticated of the three, allowing the greatest degree of flexibility and governance options. However, you will need to budget for having multiple Matillion ETL instances running in parallel.

Other Methods of Code Deployment