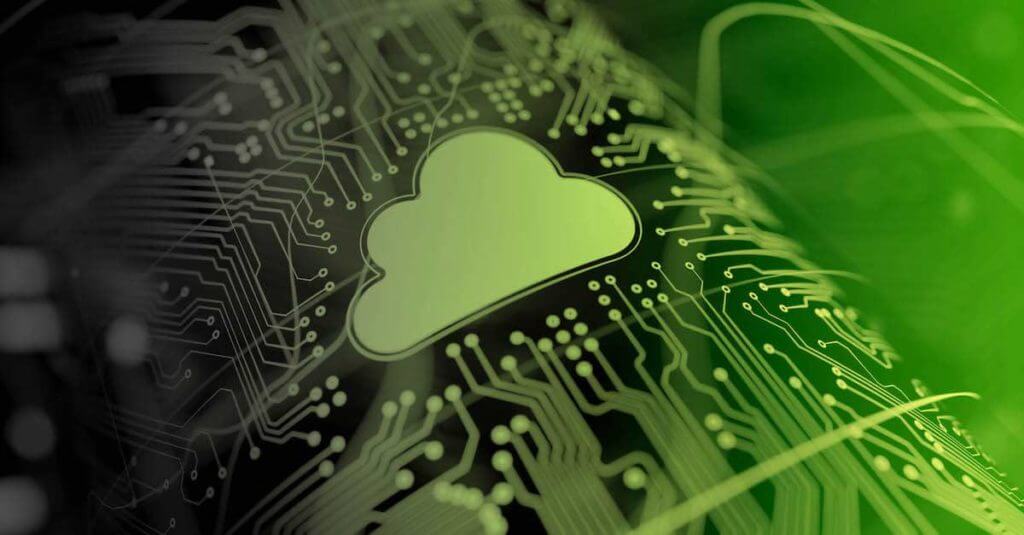 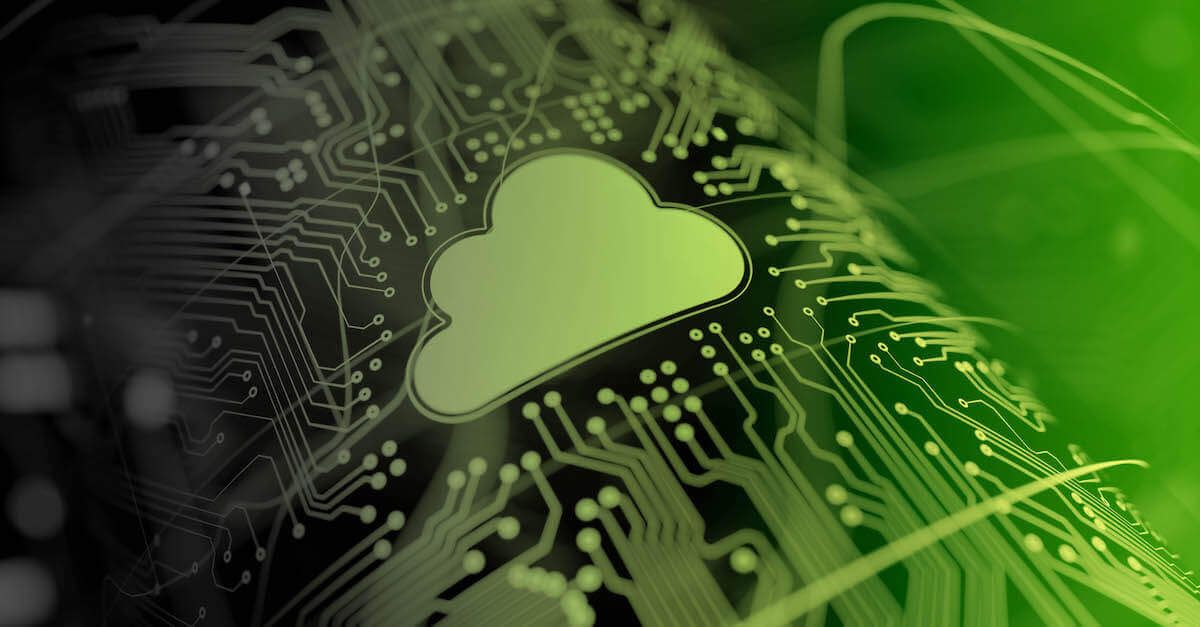 In Part 1 of this series on Matillion security controls and how to enable user auditing, we showed how to use Matillion ETL to integrate with a couple Matillion v1 API endpoints as sources of User and Audit Logging data.  In Part 2 of this series, we show how to use Matillion ETL to implement a common data design pattern, Dimensional Modeling, to get the most insights out of this User and Audit Logging data. If Dimension Modeling is new to you, or would like to learn more about this frequently used data modeling technique, Ralph Kimball’s book, The Data Warehouse Toolkit, is a great resource!

A traditional Fact/Dimension model is a good fit for storing user audit information for advanced reporting.  But, before we can start developing the Matillion ETL jobs to manage Fact and Dimension tables, we need to first design these tables. User audit events can be represented as a “fact” that occurred at a specific time, with related “dimensions” that describe aspects of the audit event.  Additionally, each “user” can have some access related attributes that can change over time. As such, a Type 2 Slowly Changing Dimension is a nice way to capture how a user’s attributes can change over time while preserving that history of change. 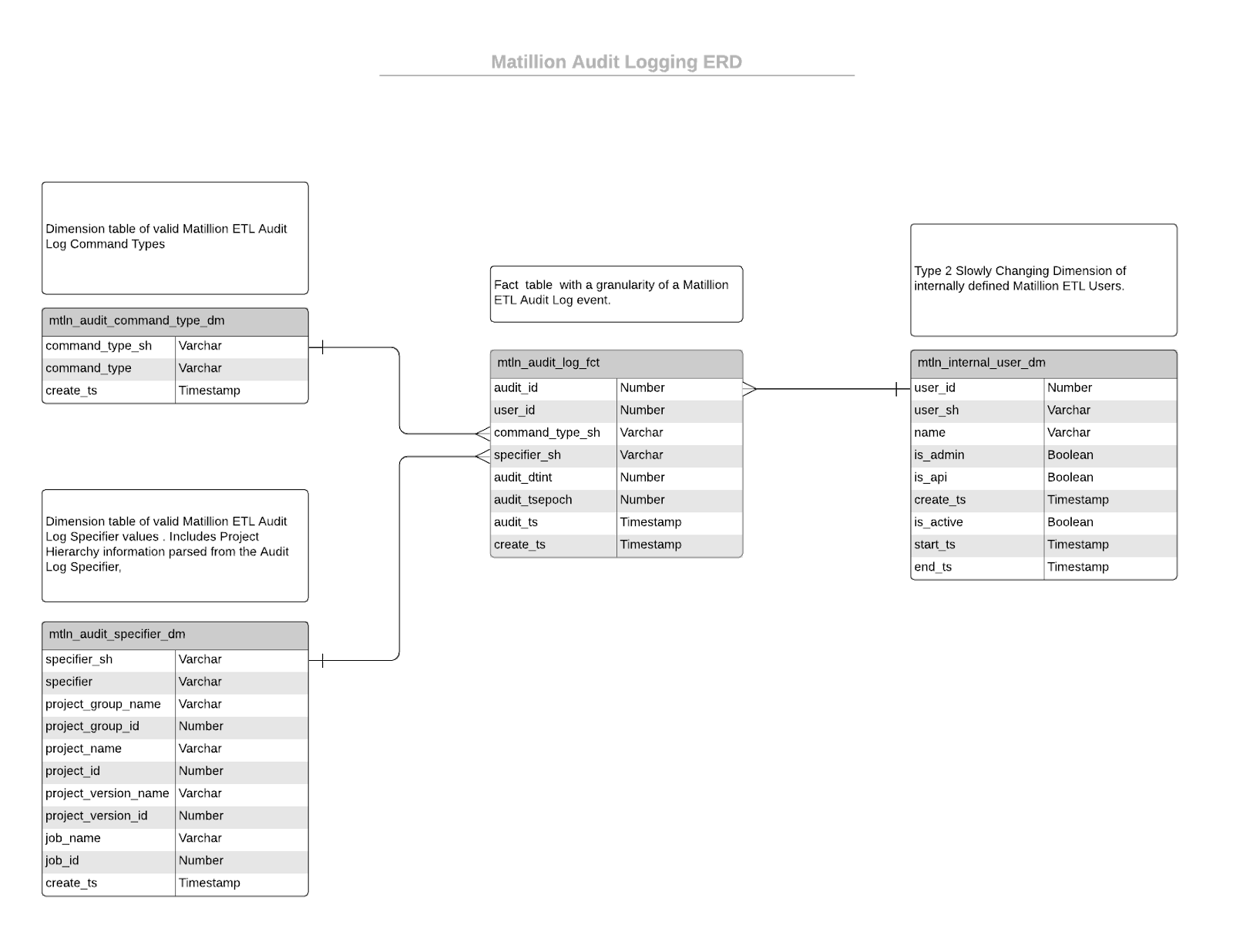 As is the case for all Matillion ETL jobs, there is one Main Orchestration Job that executes Components and other nested Orchestration and Transformation Jobs.  This is the main orchestrator of the workflow, defining dependencies and order of events. Dependencies are defined based on the output nubs of each component within the job. Notifications are also included in the job design, using an SNS Message component, to notify when any specific step in the Orchestration has failed. 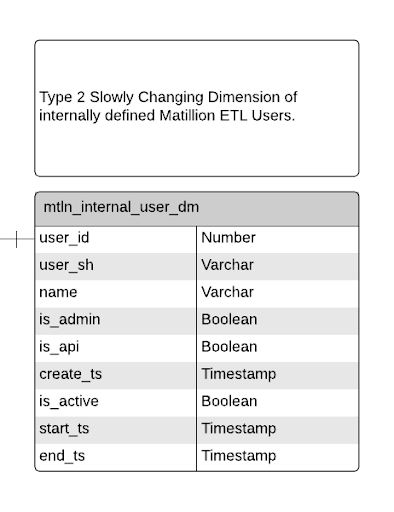 Note the following SCD-specific fields added to this dimension table:

The primary Orchestration job that manages the User Dimension table does the following (in order):

Here we are using a Python Script component to set the value of Job Variables that are used throughout the User Dimension jobs.

Next, because we are using the Jython interpreter, we are able to directly query the User Dimension table to determine if this is an initial run of populating the dimension table. The “init_dm” job variable will let us know if this is an initialization of the dimension.  In a subsequent Transformation we will use this information to determine if the “start_ts” column for new dimension records should be set to a default timestamp in the past or if the current timestamp should be used. This is a good example of using a Python Script component to easily set variable values at runtime.

In this step an API Query component is used to fetch all User data from Matillion and stage it into a table.  The API Profile used as the data source, userconfig, was detailed earlier.

The general Matillion ETL design pattern for implementing slowly changing dimensions has previously been detailed in the article Type 6 Slowly Changing Dimensions Example. See that article for additional examples of implementing SCD design patterns.  In this Transformation Job, the incoming staged data is compared against the target Dimension table. Any new, changed or deleted records have some data transformations applied to them and the resulting data set is then staged into an intermediary table, to be used in a subsequent Transformation Job. 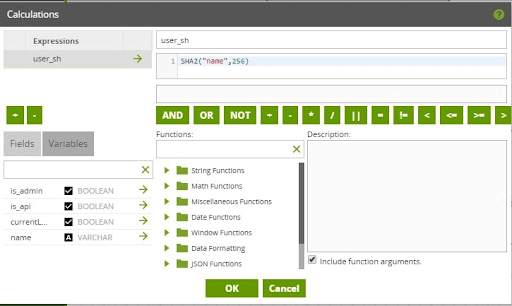 A specific design decision was made in the dimension tables to add a column that is populated with a hashed string that represents a unique entity in the dimension.  That unique entity can be represented by a composite or single key, where the related fields are passed through a SHA-2 algorithm to return back a hashed string.  Having this hashed string makes it simpler, and more consistent, to design a common pattern for comparing incoming staged data against the target dimension table.  In the case of the User Dimension, the “name” field is what uniquely identifies an entity in the dimension. The hashed “name” string is then stored in the “user_sh” field.  Because this is a Type 2 SCD, a single user record can have multiple rows in the User Dimension table (as the attributes of that user changes over time). All occurrences of the same user in the User Dimension will therefore have the same “user_sh” value.

One of the most important Matillion ETL components in this design pattern is the Detect Changes component.  This component allows us to compare the incoming staged data against the target dimension table and add an indicator for every row of staged data to denote if it is New, Changed, Deleted or Identical. When comparing the incoming staged data against the data in the target dimension table, we only need to look at the currently active dimension row for each user.  And, for the purposes of populating the User Dimension table, we can filter out any Identical rows of data. Also note that when joining the data sets, the hashed field (user_sh) is used.

Once we have filtered out Identical records from the incoming staged data, a Calculator component is used to add new fields or modify existing fields with specific business logic.  This is what we call “shaping” the data. All data transformation business logic is encapsulated into this single component so as to make the overall job design simpler to manage. The resulting filtered and transformed data is then staged into an intermediary table, which will be used in a subsequent Transformation Job. A couple things to call attention to in this step are as follows. 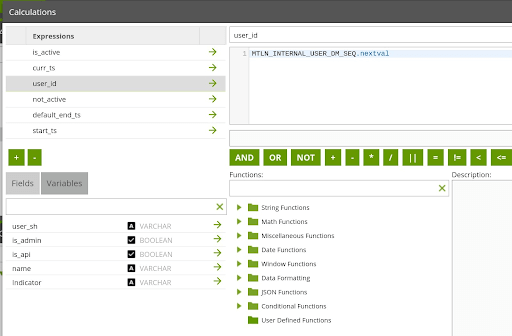 A “user_id” field has been added, which uniquely identifies a single record in the User Dimension table. In this instance, a strong Snowflake Sequence named “MTLN_INTERNAL_USER_DM_SEQ” was created and used here to assign “user_id” values.  As previously mentioned, because this dimension is Type 2, a single User can have multiple entries in this dimension table. The “user_id” field will be referenced in the related Audit Log Fact table, allowing the association of an Audit Log event to a specific User record from a point in time. 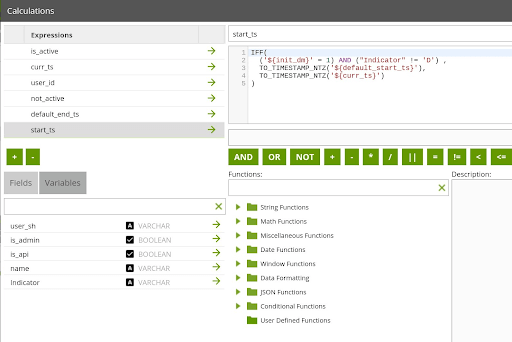 This Transformation Job takes the previously staged SCD Type 2 data and applies the appropriate data changes to the User Dimension table. Staged records will represent New, Changed or Deleted records. For New records, a row will be inserted into the User Dimension table. For Deleted records, the existing “active” row (is_active = TRUE) will be updated.  For Changed records, a new “active” record is inserted and the previously “active” record is updated.

In this article we defined a dimensional data model for storing Matillion ETL UserConfig and Audit Log data to make our data analytics ready. Then, we took a detailed look at a Matillion job that populates and manages Matillion User data in a Type 2 Slowly Changing Dimension.  By decomposing this job, we touched on techniques and points of consideration when implementing SCD design patterns in Matillion ETL. In the final part of our 3-part series on Matillion security controls and user auditing, we will provide a similar detailed look at using Matillion ETL Audit log data to populate Facts and Type 0 Dimensions.

To learn more about security controls and cloud security, download our ebook, The Data Leader’s Guide to Cloud Security and Data Architecture.

For Matillion ETL for Snowflake (AWS), version 1.39.10 or higher

For Matillion ETL for Amazon Redshift, version 1.41.4 or higher

For Matillion ETL for Snowflake (GCP), version 1.43.3 or higher

For Matillion ETL for Snowflake (Azure), version 1.42.12 or higher