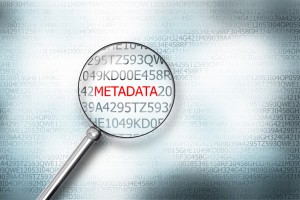 For many, it’s not a question with an immediate answer. Even among those familiar with the definition of metadata, there’s still a widespread misconception of metadata as merely akin to file headers or database structure definitions.

And to be sure, file headers and database structure definitions are metadata. But metadata also includes many more other interesting pieces of information—and there’s a growing sense that here is where significant untapped value lies.

At which point, let’s step back a remind ourselves of the definition of metadata. Quite simply, it’s ‘data about data’.

And a growing amount of routine data capture comes ready-equipped with potentially very useful metadata—metadata that would otherwise be thrown away or left unregarded, but which could, analysed correctly, contain much of value.

What metadata, exactly? And how would the value be derived? Let’s take a look.

Consider a simple business-to-consumer e-commerce transaction. And to repeat, a ‘transaction’ need not imply an actual purchase. An enquiry, or click-through, is equally valid.

A little thought reveals that alongside the basic bones of the transaction in question, a lot of other useful information is also captured, or is capable of being captured.

The time of day, for instance. The IP address, if static; and the Internet service provider, if not. The browser in question, which can provide fairly precise clues as to the type of device. Operating system, for another. Fairly broad geolocation clues. And so on, and so on.

What might a company infer from this? It’s not difficult to see. A flurry of interest from (say) Apple users in Switzerland, for instance, might quickly dictate pricing and marketing approaches that would be quite different from those adopted in respect of a Windows XP user with a long out-of-date browser such as Internet Explorer 6.

And in the case of mobile devices, depending on users’ privacy settings, the geolocation data can be precise enough to pinpoint particular streets or villages—in other words, enabling businesses to make fairly informed judgement as to consumers’ socio-economic status.

Metadata in the supply chain

And it’s not just in business-to-consumer e-commerce that transactions’ metadata contains potentially valuable insights. In supply chains, too, much routine information carries with it metadata that might be of interest.

Increasingly, for instance, mobile data transactions are triggered when deliveries are made, shipments collected, or waypoints passed.

And while it’s useful to know basic information such as the time of day, it’s not that much of a stretch to get useful geolocation data as well, pinpointing a given transmission to a particular place.

Nor does this need a GPS interface: in the case of (say) 3G or 4G services, triangulation and other techniques also deliver useful geolocation data.

Roll it all together, and there’s a considerable case to be made for taking a long hard look at precisely which metadata a business might have available to it—and just what could be achieved by mining that information.

Granted, data volumes will be high, as metadata that would otherwise be stripped out and discarded is now retained.

But cloud-based storage has never been cheaper, and cloud-based analytics never easier to deploy.

What’s holding you back?

Want to find out more about implementing Cloud Analytics tools in your business? Download our free eBook below.